The Society has begun a series of You Tube modeling videos to showcase some of our members modeling efforts.  These will be posted as they are done and we will try to do them on some regular basis.  We hope you enjoy viewing them and will consider being a part of one. You can do that from your home and we will provide all you will need to produce a segment for us.

Modeling the NYC During the Pandemic Lock-Down

Check out this NYCSHS produced video highlighting some of the modeling of the NYCS that has been going on during the Lock-Down over the last two months.

Link to video is below!!

Featuring the modeling of the following NYCSHS members:

We will soon be posting videos of some of our members’ layouts. If you are interested in having us post a short video of your layout, send an email to nfwiddifield@nycshs.org and we will arrange to post your video here.  Videos must be no longer than 60 seconds.

This is an example of what we would like to start posting here.  This is NYCentral Modeler Editor, Noel Widdifield’s NYC layout in 1/29 scale.  Click here to watch the video.

Click on the photo above to see the video.

Click on the photo above to see the video.

This is a video of NYCSHS President and Editor of the Central Headlight, Rich Stoving’s NYC layout.  Click here to watch the video.  Videographer is NYCSHS member John Heitmann.

There are three videos of NYCSHS Director, Tom Gerbracht’s’s NYC layout. Tom is the author of the new exciting NYCSHS book called Know Thy Hudsons that is available in the NYCSHS Collinwood Shop. (Click on the titles below to see the videos.)

Know Thy Hudsons I

Tom is also the author of the recently released NYCSHS exclusive book, Know Thy Niagaras. Now Tom returns with some videos of his NYC Niagaras.

The club layout is his only outlet to run his NYC rolling stock until his layout is built. The guys at the Winchester Model Railroad Club are always surprised what at what he might bring next to run on  meeting nights… He says they are even beginning to tolerate this Northern modeler.  The NYC didn’t run in Winchester

The opening scene in the first vidoe is a A-B-A Rivarossi lashup, with a dummy B unit,  pulling a consist of Rivarossi passenger cars in the Pullman green paint scheme.

Next you see  the “Mercury” passing through with IHC 4-6-2 Engine and passenger cars.

Rober loves RS-3’s and that section of the video shows why. The units are Athearn and have the correct dual stacks for passenger service. They are in the cigar band paint scheme.   Athearn also offers them in the Grey Lightening stripe paint which he also owns. The passenger cars are AHM in the Two-Tone paint scheme. 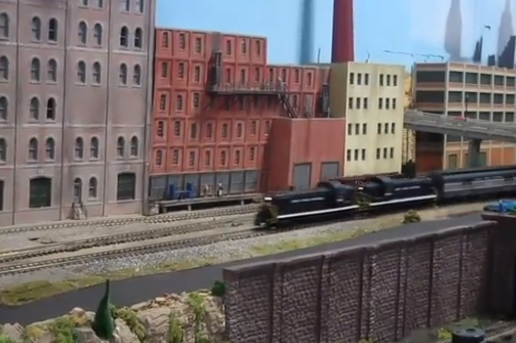 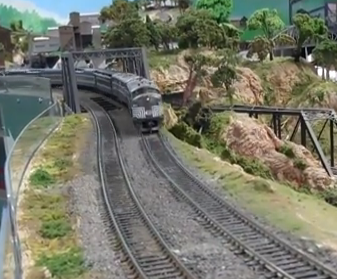 Roger recently sent us a You Tube video of some Bachmann auto-racks running on  an HO version of tri-level auto racks on the Hot Shot Freight Train designated ML12 on the New York Central heading to North Bergen NJ from Selkirk NY running on the Winchester, VA railroad club layout.

Those are Bachmann auto-racks which I painted out the Penn Central logos and yellow top safety railings. I decaled them using micro scale decals sets and also experimented in making my own. The cars with the white background for the logo are my computer made decals. I upgraded the cars to Kadee couplers by installing a body mount coupler housing on them. This took some Dremel grinding and cutting to make way for the housings. I also trimmed off the original coupler holders from the trucks. To make them 18″ radius compatible I installed a #119 shelf head Kadee coupler on one end of the car and a #146 long on the other. This provided enough clearance and kept the spacing between the cars visually acceptable. Some of the older cars I replaced the truck centering pin with a screw to prevent the weeble wooble look while running even though I do recall some of the prototype cars swaying in the breeze. This video is shortened because the head end was running under a overhead signal bridge that started to clear off the top layer of automobiles from the racks. (Murphy’s Law) They are high clearance cars so check carefully before running… The Locomotives are Athearn GP-35’s 1970’s era and are still going strong! That is natural weathering on them from all the hand oil and dirt during the years.

Winchester Model Railroad Club Ope House Videos that include several shots of Roger’s NYCS locomotives and rolling stock. The first one has several minutes of good shots of other railroad trains, but then you get to Roger’s NYCS. The next one starts right off with a NYC Mail and Express train.

Phil Irwin comes from a long line of NYC men. His great grandfather worked on the track gang of the Mohawk & Hudson smoothing the way for the De Witt Clinton’s run. His grandparents were involved as a maintenance of way worker, and grandmother was one of the first female telegrapher for the Central. His father was a conductor on the Hudson division for 42 years. Phil was an “unofficial” student/apprentice which gave him access to the property. The knowledge gained from this experience is clearly shown in his layout by the attention to the trackwork, train and signal operation, and modeling details. The layout is a shelf type layout literally traveling through multiple rooms to the delight of the B&B guests…

Dave Mackay, NYCSHS Director, primarily models in HO-Scale, but he also has a small outdoor Large Scale railroad.  Being a kitbasher, he decided he needed some Large Scale models that more accurately portrayed NYC equipment, so here is what he did.

The 0-6-0 is a Piko model that just came out recently. It isn’t a very “close” prototype to much, but I found in the Society Steam Books (they do have some value!) class B-56, which were originally LS&MS engines. The wheelbase, driver diameter, cab size and tender where all quite close. The boiler was short about 2-1/2″. I made a brass frame extension, put in a filler piece for the boiler, removed all the original domes, and changed all the cab windows, that ‘s the short version. I changed it from DCC w/sound to radio control, battery powered, w/sound.  Here is what he started with and you can see how he changed it in the video.

The caboose was a Bachmann EBT narrow gauge 22.5/1 model. It has been lowered 5/8″ of an inch, and shortened about 2″, with a new, scratchbuilt cupola. the markers light up as well.

Here is a photo of the real thing and you can compare it to Dave’s model in the video. 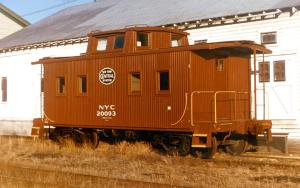 David has been sharing the building of his O-scale layout in the NYCentral Modeler for a couple of years now.  We have seen how he started with the construction of a large building to house his layout and watched him progress through benchwork and track laying.  David sent us this video to share his thrill of finally running trains on the layout. We will continue to watch David build the NYC in Australia.

NYCSHS member, Joe Burgess, who lead the 2017 NYCSHS Convention, owns a NYC bay-window caboose.  He forwarded the video found on You Tube to us for our enjoyment.

NYCSHS member, Mike Williams shared these You Tube videos with us. 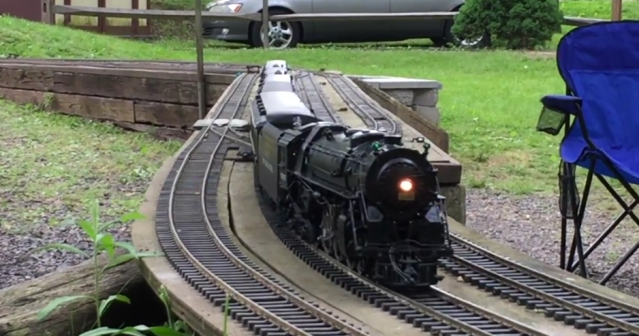 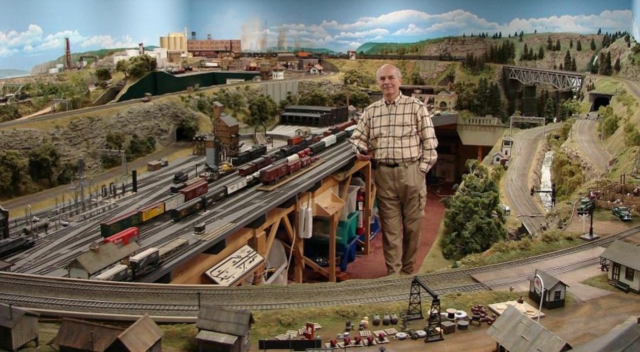 The fact that it is S-scale makes it pretty unique in NYCS modeling.  We don’t see many of these and it is a beauty.

To send a video of your layout to us for inclusion here contact Noel Widdifield at:  nfwiddifield@nycshs.org