Along the Old West Shore

Along The Old West Shore 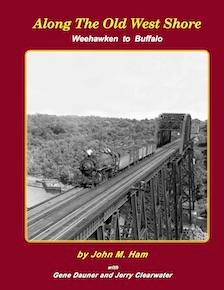 The Old West Shore was a fully equipped, signaled, double track railroad across almost the entire state of New York, i.e.: NOT a branch line.  Have you ever heard about how the Nickel Plate and the Erie advertised themselves as the express routes from Chicago to Buffalo and New Jersey?  Both of their premier freight trains regularly outperformed the NYC.  If you watch their steam era videos, you’ll see LOTS of high value perishable and manufactured goods traffic — all siphoned off the NYC.  They always beat the NYC’s freight schedules because nothing much got in their way.  Meanwhile the NYC struggled daily to get traffic through the likes of Toledo, Cleveland and Erie.

Well, speed-wise, the NYC fought back east of Buffalo with the West Shore’s unimpeded, direct route.  NYC’s freight trains that were “hot”, and full of New York City & Boston traffic, ran at high speed across upstate New York on the West Shore.  So, it was an IMPORTANT line, but missed out on all the publicity because the named passenger trains took the four track route through all the cities (Rochester, Syracuse, Utica).  Hence, with little publicity (out-of-sight, out-of-mind); some westerners ignored the West Shore, but the railroad oriented folks in New York State have not forgotten, and John is tapping their latent interest with quality photos depicting every station and wide spot that nobody has yet covered.

The West Shore’s creation is also an interesting tale.  In the late 1800’s rail competition between big cities got very ugly.  They would cut their rates to the point that margins to meet fixed costs were thin to nonexistent.  Weaker roads (hello Erie & Lehigh Valley) went bankrupt.  That’s one reason railroads got into so much trouble with the people and the government.  They would make up for their death spiral “big city to big city” rates by over-charging for shipments to/from small towns where they were the only railroad around.

So, in this environment, imagine the country’s two premier railroads building competing lines, each within sight of the other’s ‘bread and butter’ four track main line.  That’s exactly what was happening in 1883 & 84.  The Pennsylvania Railroad was clandestinely financing construction of the New York, West Shore & Chicago.  After detecting ‘a rat’, William H. Vanderbilt acquired a right-of-way and latent charter across Pennsylvania.  He started the expensive tunneling and grade work required for his own double track railroad, the South Pennsylvania.  JP Morgan saw that completion of these two lines would lead not only to ruination of the nation’s two strongest carriers, but the whole US economy could go into depression as a result.  So, he got Vanderbilt and the Pennsy to each send emissaries to negotiate a peace.

Chauncey Depew for the NYC met George Roberts and Frank Thomson (President and Vice President of the PRR) aboard Morgan’s 165 foot yacht Corsair on July 10, 1885.  Why meet on a yacht?  No interruptions, and no places for people to storm out and pout.  Supposedly, Morgan told them, “Nobody’s leaving this vessel until you have an agreement, … and when the food runs out, the food runs out!”   Five hours later, the PRR had agreed to purchase Vanderbilt’s South Pennsylvania Railroad, and the NYC bought the West Shore.  NYC used the West Shore to great advantage while Pennsylvania’s anti-trust laws hampered the Pennsy from doing much with the South Penn.  The South Penn’s right-of-way lay dormant until the late 1930’s, when the state bought it and built what became the Pennsylvania Turnpike on it.

This is the only book ever published about the entirety of the New York Central’s West Shore Railroad, a 450 mile line that ran along the western banks of the Hudson River and west along the Erie Canal to Buffalo on Lake Erie.  The book covers over 100 stations and the West Shore’s branch line to Earlville with hundreds of steam locomotive action shots and dozens of color diesel era images.

Readers will discover that the West Shore was NOT a branch line.  It was a well engineered, double track, signaled main line railroad!  NYC used the route to move freight unimpeded from Buffalo to the Albany area, and then down the Hudson’s ‘West Shore’ to Jersey’s ports and the New York region’s manufacturers.  While the four track main line hosted premier passenger trains, this route labored unpretentiously in the shadows.  Now, John Ham shines deserved light upon a route dripping with history, and still a vital CSX link.

Reserve yours today.  Don’t miss out!!!

2 Responses to Along the Old West Shore