Posted on March 7, 2010 by nycshsblogger 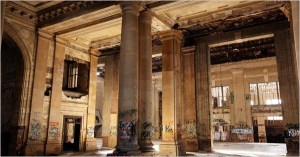 DETROIT — The last train pulled away more than 20 years ago from Michigan Central Station, one of thousands of “see-through” buildings here, empty shells from more auspicious times. Many of the blighted buildings stay up simply because they are too expensive to tear down. Yet Michigan Central is in a class of its own. Some city officials consider it among the ugliest behemoths to pockmark Detroit and have ordered its demolition, but others see it as the industrial age’s most gracious relic, a Beaux Arts gem turned gothic from neglect but steeped in haunting beauty.

Now Detroit has become embroiled in an urgent debate over how to save what is perhaps its most iconic ruin — and in the process, some insist, give the demoralized city a much needed boost. “People compare it to Roman ruins,” said Karen Nagher, the executive director of Preservation Wayne, an organization that seeks to protect architecture and neighborhoods around Detroit. “Some people just want it left alone. But I’d love to see that building with windows in and lights on again.”

Read the rest of the article here.

This entry was posted in Research Information. Bookmark the permalink.