Posted on January 1, 2003 by nycshsblogger

The Society’s 2003 calendar is now available. Once again our calendar features two paintings by the late Howard Fogg, and which were part of the collection gathered and published by the late John W. Barriger when he was the president of the Pittsburgh & Lake Erie. On the front cover is Alco PA-1 (DPA-2a) #4201 on NYC Train #16, the “Ohio State Limited” near Bear Mountain, NY. On the back cover is A-2a #9404 at Beaver, PA Station coming off the Ohio River Bridge in 1949, in a wintry Christmas scene. We believe Mr Barriger used this on a Christmas Card. 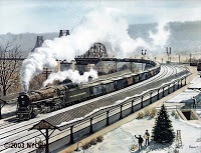 This entry was posted in NYCSHS Calendars. Bookmark the permalink.